New Help for Those With Accidental Bowel Leakage (ABL)

New Help for Those With Accidental Bowel Leakage (ABL)

Background
Fecal incontinence is a vastly under reported but fairly common problem. It is often associated with considerable costs due to the high frequency of changing and the resources needed for cleaning up after episodes of fecal loss. For the user, embarrassing situations caused by leakage have a negative impact on their quality of life and often leads to social isolation.

You might not guess it, but as many as one in ten adult women have experienced accidental loss of stool in the past year. It’s a common problem, even if it’s not a common topic of conversation. Accidental loss of stool is sometimes associated with an intense urge to rush to the bathroom, or it can happen with no warning. Bowel control problems particularly affect women who have experienced pregnancy, childbirth, or nerve or muscle damage in the pelvic region. As there are multiple causes for bowel control problems, effective treatment is particularly difficult and many times invasive.

There are over 20 million women of all ages in the U.S that suffer from some sort of bowel control problems, over 8 million of them experiencing accidents on a monthly or more frequent basis. Because this is a condition that can be embarrassing and debilitating, women often withdraw from social and professional activities, which have a dramatic effect on their quality of life. The majority of women suffer in silence and do not seek treatment for their condition.

A study published in the 2012 International Journal of Clinical Practice showed that over 70% of women over 40 preferred the term accidental bowel leakage (or ABL) to describe this condition. This overwhelming preference for the term ABL is not surprising. For many people, accidental bowel leakage is a term that best describes how they experience their little bowel leaks—often unexpectedly and accidentally.

Those with ABL manage it with absorbent products, drugs, dietary changes, exercise, and surgery.

Who Experiences ABL?
ABL affects both men and women. Studies show that 1 in 5 women over the age of 40 and a similar number of men experience ABL. Nine out of 10 have small to moderate amounts of leakage.

Following are four products that can help. 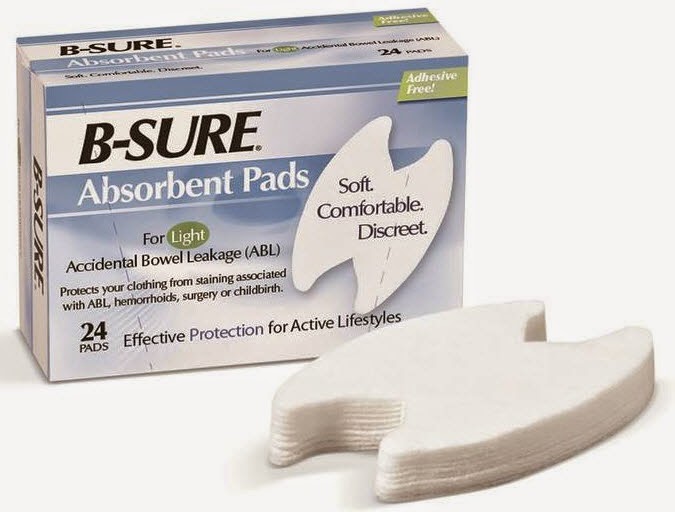 Abena Abri-San Special  This is a specially designed pad, the only one like it in the world… just for bowel incontinence. It is imported from Denmark. Leakage barriers on the sides have built in pockets to contain BM even when released under pressure. The unique groves down the center of the pad better contain runny BM.

The backing is breathable to reduce the risk of skin soreness caused by repeated contact with feces. The pad is designed to allow frequent changes. Abri-San Special is based on the cost effective two piece system, minimizing product costs, even when changed frequently. We recommend using products from our Abri-Fix range when fitting Abri-San Special.

Eclipse System Insert  A company in Sunnyvale California, Pelvalon founded in 2010 at Stanford University’s Biodesign program is a collaboration between the schools of medicine and engineering.

Pelvalon has created a new product and new approach for better controlling accidental bowel leakage (ABL). It is intended to treat ABL in women 18 to 75 years old who have had four or more fecal episodes in a two-week period. The product is an inflatable balloon, which is placed in the vagina. Upon inflation, the balloon exerts pressure through the vaginal wall onto the rectal area, thereby reducing the number of ABL episodes. The device is initially fitted and inflated by a clinician (with the use of a pump) and after proper fitting, the person wearing it can inflate and deflate the device at home as needed. The device should be removed periodically for cleaning.

The device consists of a silicone base and a posteriorly directed balloon. The patient controls the inflation pump, inflating the balloon to add pressure and interrupt stool passage, and deflating it to allow bowel movements.

Treating bowel control problems through the vagina is a new concept. There is another product in clinical trials to control stress urinary incontinence (SUI) that is a balloon which is vaginally inserted. Its called the Solace Bladder Control Procedure.

The Eclipse System Insert, which is not yet approved by the FDA and is still investigational, is placed in the same location as a tampon. The user inflates a balloon on the Insert, which puts pressure on the rectum and is designed to protect against unwanted stool passage. Women can remove the insert at any time. The Eclipse System is a non-invasive treatment option that does not require surgery.

Does It Actually Work?  It has been clinically tested with 61 women. Following are the findings:

Adverse events associated with the device included pelvic cramping and discomfort; pelvic pain; vaginal abrasion, redness, or discharge; and urinary incontinence. All device-related adverse events were mild or moderate, and none required any significant intervention (i.e., no surgeries were needed).

How Its Used. The product will begin placement in localized urogynecologists offices and will expand over time to ob/gyns. A woman will visit her doctor who will fit her for the most appropriate size (three base sizes and two balloon sizes). The patient will check for comfort by standing, sitting, etc. before leaving the office. A return visit is expected in a week and following that the product can be used until the next exam (yearly). A woman can remove it to clean it or for any other purpose at any time.

The device isn’t a good option for everyone, however. After being fitted with the device, approximately 40 women who were screened and fitted did not continue. This rate of discomfort or nonacceptance is similar to that associated with pessaries. Also see Poise Impressa.

The initial fitting procedure for the bowel control device requires a little more provider and patient training, beyond what is needed for use of a traditional vaginal pessary. Patients in the study could put the device in and take it out as they wished. Most patients used it all day long, and some took it out at night. Patients were instructed to take it out once or twice a week to wash it. The cost is expected to be in the range of $1200 to $1400 when it becomes available later this year.

Depends Diapers - Things Everyone Should Know About Adult Diapers
How Incontinence Products Are Like Shrimp
Depend Underwear for Men Maximum Absorbency
7 Tips for Adult Incontinence
4 Services for the Elderly Who Need Help at Home
Copyright © 2019-2023 Caregiver Partnership. All rights reserved.